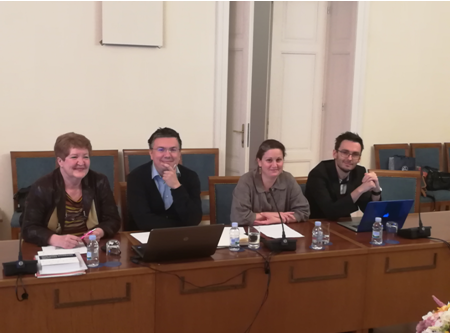 On Thursday, 11 April 2019, a joint thematic session of the Committee on the Familiy, Youth and Sports and the European Affairs Committee was held in Croatian Parliament, where members and associates of Centre for Democracy and Law Miko Tripalo presented the results of the project Destination EU: The Future of Youth in Croatia, which was co-financed by the Ministry of Foreign and European Affairs.

At the beginning, all participants were welcomed by the Presidents of both Committees, Nada Turina-Đurić and Domagoj Ivan Milošević, respectively. Introductory remarks were given by Vanja Mladineo, Executive Director of Centre for Democracy and Law Miko Tripalo, during which she presented the work of Centre Miko Tripalo and its past activities. That includes studies and projects in the field of youth and the European Union, two areas where Centre Miko Tripalo is systematically engaged for a long time.

Dario Čepo, project manager, explained the methodology of the Destination EU: The Future of Youth in Croatia project, the way the project team collected the data during workshops with students in Pula, Osijek, Zadar and Vukovar (survey and panel discussions) and, finally, he introduced the results and policy proposlas that were eventually given in the publication published by Centre Miko Tripalo. The research has shown that most of the respondents believe that young people should be politically engaged, but the reason for their apathy is the lack of interest from political actors to include them in the process of giving proposals or decision making.

Marko Kovačić, project team member, commented on the mechanisms that institutions in Croatia can use to increase youth involvement in EU policy making and he assesed the level and quality of their utilization. In addition, he noted the positive changes that have taken place since Croatia joined the EU, with the emphasiz on the functioning of structured dialogue as a mechanism which can be used by young people to express their thoughts on specific issues.

Vlasta Ilišin, Centre Miko Tripalo member, held a presentation titled „Youth and the European Union“ and spoke about perception and (dis)trust of youth in social and political institutions. Her thesis was supported by the research that indicates that more than two thirds of young people believe Croatia should stay in the European Union. Likewise, she showed that young people in Croatia express distrust in executive branch of government and political parties, and as the most important advantage of EU membership they cited employment opportunities abroad.