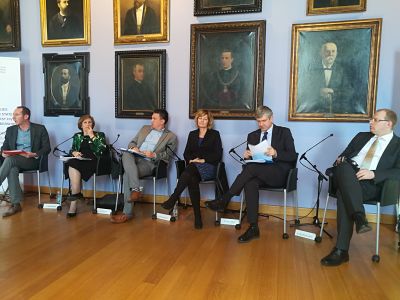 On Thursday, 21 March 2019 at 10:30 in the Aula of the University of Zagreb, Centre for Democracy and Law Miko Tripalo organized a roundtable Citizen’s Rights and Challenges to Democracy in Croatia. This roundtable is part of Centre Miko Tripalo’s Jean Monnet project entitled European Values in a New Member State: Croatia in the First Five Years of EU Membership, co-financed by the European Union.

Tvrtko Jakovina, President of the Management Board of Centre for Democracy and Law Miko Tripalo, gave the opening speech and welcomed all the guests, members and friends of Centre Miko Tripalo and members of foreign embassies. He stressed that Centre Miko Tripalo is actively engaged in a number of topics: clientelism, decentralization, youth, but with this project it seeks to stimulate public debate on European values ​​in Croatia and examine their impact on certain segments of public life. Dario Čepo, academic coordinator of the project, said that Centre Miko Tripalo showed its interest in European integration, a process in which Croatia should not be a passive actor. During the roundtable discussion speakers will try to answer the question of what Croatia can offer to the European Union, and what can be learned from other member states on the issue of European values.

The first part of the roundtable was opened by Karlis Bukovskis. In his speech he said that a member state can no longer be regarded as a new member of the European Union once it takes over the presidency of the Council of the European Union. This is a challenge that Croatia still has to take on and therefore it is the right time to launch a debate about European values ​​and the manner in which Croatia will present itself to the EU. Bukovskis believes there are new trends on the social and political scene; he highlighted the rise of populism that is here to stay and is manifested through “catch-all” approach of politicians which eventually leads to the minimal role of political parties and practical ideas. He said that voters are looking for “entertainment” and according to that principle, they elect decision makers. He defined Nigel Farage as eurosceptic but believes Viktor Orban is not one, because of  the way he exploits the benefits of Hungarian membership in the EU. He differentiated politicians into federalists and intergovernmentalists. Federalists advocate for stronger European and international integration, and intergovernmentalists want a more important role of the national structures. He stated that there is an increasing number of intergovernmentalists in Latvia, but also in Europe, as shown by the results of Brexit referendum.

Višnja Samardžija claims that there is a lack of understanding of European values in Croatia. In her speech she relied on the results of 2018 autumn research which showed that only 30% of Croatian citizens support the EU, while the European average is 42%. She also considers problematic the fact that the majority of Croatian citizens are focused on socio-economic advantages that the EU offers. She pointed out a paradox in Croatian society: Croatian citizens support specific European policies, but they do not support the EU enlargement policy. Croats have relatively small amount of trust in national institutions (in judiciary 24%, in public administration 27%), while their confidence in the European institutions is on a higher level (judiciary 50%, public administration 51%). She underlined that public focus needs to be on European policies and they should be discussed with young people and the general public.

Zrinjka Peruško believes that the world is today on a turning point which is triggered by the digital revolution. Technology is here to undermine old institutions and to provide space for new ones. Consequently, this leads to the emergence of new political elites. She said that Croatia has not made a change towards inclusive institutions. That case is evident in three specific areas. First, there are currently more than 1000 lawsuits against journalists, and the state has done nothing about it. Second, HRT as a public television no longer performs its main role – which is shown by the quality decline and non-professional approach. Third, non-profit media are not adequately financed in Croatia (media policy does not work in the public interest but serves particular interests).

Second part of roundtable discussion was opened by Koenraad De Ceuninck. He spoke about the relationship of local democracy in Belgium and European values. He claimes there are two approaches of europeanization of local politics in Belgium. Top down approach, in which European rules and policies are implemented. The bottom-up approach, in which the nation-state or local actors participate in European networks. During the 1990s Belgium was far from the European Union at the local level (“Far Away from Brussels”). There was a low level of public awareness, but today the situation has changed and interest in European values ​​is growing. He sees decentralization as a core European value but also as a trend in Belgian local government. At the end, he urged for more discussion on local democracy and transferring responsibility to the local government.

Vedran Đulabić defined seven points / trends that appear in Croatia regarding the issue of local and regional government. First, the majority of citizens perceive local democracy through local elections and they do not see the results of government actions on the local level. Second, referendums and civic initiatives at the local level are not sufficiently represented. When they do appear, they mostly adress the issues related to the environment. Third, the rising trend of shifting political activities outside the political parties. Fourth, the absence of territorial structure reform – this is extremely important because the functioning of local authorities often depends on the size of units. Fifth, incoherent process of decentralization – decentralization is important to politicians only in a declarative way. Sixth, the emergence of clientelism and corruption at the local level. Seventh, the European dimension is locally projected exclusively through European projects and funds.

Last speaker, Dario Čepo believes that we all talk about European values, but we define them differently. There are three ways in which European values ​​can be implemented in society: through the process of europeanization, policy of enlargement, and the principle of conditionality. It turned out that Croatia regressed in areas which were supposed to be influenced by the principle of conditionality the most, as shown by the Liberal Democracy Index 2018. Those areas are: freedom of expression, lack of media independence, media (self)censorship. He said that profound changes and a shift towards European values ​​are not in the interest of political actors in Croatia. European elites, on the other hand, seek potential member states to fulfill technical requirements, but not to internalize them. European values ​​observed in this context are still a matter of fiction in Croatian society.