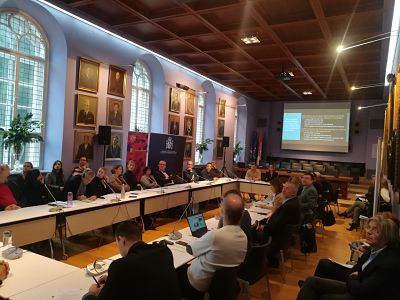 The second day of the international conference European Values, Member States, and the Future of the EU, organized by Centre for Democracy and Law Miko Tripalo, was held on Friday, 6 December 2019, in the Aula of the University of Zagreb.

The first speaker on the panel on justice and rule of law was Susana Sanz Caballero from the University CEU Cardenal Herrera from Spain. She began her presentation by defining rule of law and explaining its basic elements. Sanz Caballero argued that the European Union has had a positive impact on candidate countries during the accession negotiations, but after their accession, the EU proved unable to solve the problem of declining levels of rule of law because the conditionality principle was basically unsuccessful. She compared the negotiation experiences of candidate countries form Southwestern Europe and those from Central and Eastern Europe. In the first case, no entry criteria were explicitly stated, while in latter case the Copenhagen criteria were introduced. When it comes to countries form Southwestern Europe, there was no mention of values or the conditionality principle, but they were introduced later. Finally, she spoke about and compared the declining levels of rule of law in Hungary and Poland.

The second speaker was Lora Vidović, Ombudswoman of the Republic of Croatia. Vidović stressed that the rule of law is not just a theoretical concept, it needs to be internalized as a value. She used the example of Finland as a county that emphasized the rule of law as a priority during the Council of the European Union presidency. She said that 60% percent of Croatian citizens do not trust the judiciary and believe that their position is not equally valid before the law. A major problem is the non-functioning of the free legal aid system which is not available outside of urban centers where 50% of elderly people live in a risk of poverty. She underlined long judicial processes, increased number of lawsuits against media and migration as problems within the legal system. If there is no investigation against those public officials who abuse their power, Vidović claims, there is no protection against autocracy. Civil society as an area of freedom needs to be protected.

The next speaker was Goran Selanec, a judge on the Croatian Constitutional Court. He initially questioned whether the Court of Justice of the European Union can identify solutions for the downfall of the rule of law and whether it has strategies to prevent its undermining. Selanec argues that the discourse on the protection of human rights was predominant in the past few years. Today this is changing and the discourse on the protection of judicial independence has become a priority. The attack on the judiciary, according to Selanec, comes from executive and legislative authorities; a process that undermines constitutional democracy which does not exist without an effective division of power. He stated that from February 2018 to December 2019 there have been only seven important verdicts concerning the independence of the judiciary, a number which is extremely low. He argues that citizens need to be subjected to value-based legal regulations, not partial solutions. The attack on the rule of law is easiest by attacking the courts; when mutual trust disappears the rule of law ceases to function.

Josip Kregar from the Faculty of Law at the University of Zagreb had a presentation on populism and the rule of law. Populism grows in accordance with the growth of social uncertainty and anxiety. In Croatia we want to keep the judicial independence, but those who work in the justice system want to use their independence for their own interests. Changing this is impossible without internal resistance which is currently lacking. Populism, as such, relies on social regression, said Kregar, and believes that it can further grow with new communication channels for example social networks which makes those ideas easy to spread. Democratic institutions and their design are partially responsible for the growth of populism.

Karlo Kralj from the Scuola Normale Superiore in Italy and the Faculty of Political Science in Zagreb spoke about the Disobedient Democracy project, which included four case studies of research into protest behavior in Spain, Portugal, Croatia and Serbia. The project detected and coded protests covered in daily newspaper from each of the countries listed. The results showed that in Spain and Portugal mobilization was co-organized by trade unions and new actors in the public space, while in Croatia and Serbia the role of trade unions was much smaller.

The next speaker was Caroline Hornstein Tomić from Ivo Pilar Institute of Social Sciences. She believes that participation depends on a number of factors such as the place that the individual occupies in society, level of property ownership, place of residence. Knowledge and motivation should be the main incentives for participation, and it is often in the family where one learns the importance of politics and participation. Civic education should especially serve those who have not received it through the family or elsewhere and it should start at an early age. It is necessary to develop empathy and a sense of solidarity, and not to impose on young people the teachers’ own views or political thinking. This would contextualize civic education into society. Young people raise their voice through mobility and the programs that they participate in, not necessarily by voting.

The last speaker was Nikola Puharić from the Youth Initiative for Human Rights. He began his presentation by stating that the European Union was founded on the ideas of peace and reconciliation. Today, there is a verbal conflict in society if we look more closely at the discourse of politicians, and this conflict is imposed on young generations. Puharić believes that today we do not have a critical view of what was happening in the past. For this reason, Youth Initiative for Human Rights launched youth exchange programs in the region to provide them with a platform for learning and participation. Young people today are afraid of participating in discussions about the past, but he notes that we are all responsible for the way we speak about the past. It is important that there are mechanisms for youth participation in all these social processes.

During the discussion, Karlo Kralj said that citizens no longer see the purpose in participating. Furthermore, civil society organizations do not want to take part in the political conflict that is currently happening in Croatia and they consider their independence to be crucial. According to Kralj, we need to encourage citizens to participate with content, new discourse and values. We need to be able to produce new ideas. Petra Đurman claims that citizens are not motivated to take part in political and social life using the bottom-up approach, while Caroline Hornstein Tomić is worried by the rise of authoritarian tendencies in European societies. Goran Selanec warned that some of the decisions that political elites make can reduce the possibility of participation. He disagrees with Karlo Kralj and his thesis that content is the most important factor. In his opinion, the form in which we present our ideas is equally important. He gave the example of elections as form. He does not believe that citizens are willing to give up their right to elect their representatives. If one is dissatisfied with the content, he is compelled to participate through form. Petra Đurman thinks that citizens will only participate in the case when their rights are abused. She underlined that we need to have more deliberative instruments. Rene Gulin from the political party SNAGA highlighted the problem of education; today there is no formal education through which young people can learn about the importance of participation.