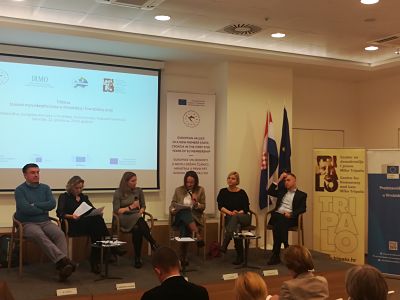 On Thursday, December 12, 2019, Center for Democracy and Law, Miko Tripalo, Institute for Development and International Relations (IRMO), Trans-European Association for Policy Studies (TEPSA) from Brussels, with assistance from the Delegation of the European Commission in Croatia and the Office of the European Parliament in Croatia, organized a panel discussion and accompanying guest lecture Challenges of Euroscepticism in Croatia and the EU at the House of Europe in Zagreb. This event was organized as part of Centre Miko Tripalo’s Jean Monnet Project European Values ​ in a New Member State: Five Years of Croatian Membership in the EU and IRMO’s Europe for Citizens Program 2019. Seen as Euroscepticism was outlined in the Jean Monnet project’s work plan as one of the topics of the four planned guest lectures, this event presented an opportunity to organize one of these guest lectures in a much broader and farther-reaching context and framework. Participation from representatives of the Croatian Foreign Ministry, European Parliament Office in Zagreb, researchers, practitioners, journalists and politicians provided for a much more impactful event.

At the beginning of the panel discussion, the guests were greeted by Višnja Samardzija from the Institute for Development and International Relations. She thanked the organizers and emphasized that TEPSA is one of the oldest associations in Brussels, and that it brings together over 40 academic institutions across Europe. TEPSA’s goal is to debate current topics and noted that the topic of Euroscepticism is certainly very relevant. She expressed her satisfaction with the continued cooperation between IRMO and Centre Miko Tripalo. Tvrtko Jakovina, Chairman of the Management Board of Centre Miko Tripalo, introduced the Jean Monnet project and its accomplishments up to date, including organizing two roundtables and the international conference on European values. He noted that this panel discussion on Euroscepticism presented an important opportunity to hold one of the lectures on the same topic planned as part of the project. He pointed out that the Center has been addressing the most prescient problems in Croatian society and politics for many years and will continue to do so in the future.

After the opening remarks, the panel moderator and journalist Tea Trubić Macan of the news site EURACTIV, gave the first speaker, Hrvoje Butković from IRMO, the floor. Butković noted that one of the causes of Euroscepticism in Croatia lies in the current coalition of the HDZ and the HNS, and said that though such cases are also present in Sweden and Italy, where parties of different ideological backgrounds are at the forefront of the executive branch. He believes that such coalitions are formed to keep Eurosceptic parties away from power, but are ultimately counterproductive since these parties end up actually strengthening and gaining in support. As an additional cause of Euroscepticism in Croatia, he cites the lack of agreement between politicians and citizens regarding the introduction of the Euro: 60% of citizens do not support it, while the politicians overwhelmingly do.

Katja Šare, Head of the Independent Sector for Public and Cultural Diplomacy, Information and Public Relations of the Croatian Ministry of Foreign and European Affairs, pointed out that the growth of Eurosceptic parties is undoubtedly present in Europe in general, but according to research by the Ministry, the support for Croatia’s membership in the European Union is growing. The key reasons for Euroscepticism are the spread of misinformation and populism. Croatia, as the newest EU member state, is pushing for further enlargement and putting this issue on the EU agenda within the framework of the Croatian presidency.

Sandra Benčić from the Political Platform We Can warned that we are misusing the term Euroscepticism. Euroscepticism, as such, is not necessarily bad because it questions the current state of affairs, while right-wing populism and nationalism have a destructive character that Euroscepticism lacks. She argues that economically weak states are unable to solve key problems that they face because these problems remain in their national domain, not in the realm of the European Union. The European Union is therefore not to blame for the bad situations in some countries. However, the European Union is often ineffective in tackling its problems such as the Euro and the issue of budget deficits. She believes that young people today do not participate in European processes because they do not feel themselves to be a part of the larger European community.

Dario Čepo, a member of the Miko Tripalo Center and an assistant professor at the Faculty of Law at the University of Zagreb, noted in his lecture that the definitions of Euroscepticism have changed over time. Initially, the root of Euroscepticism in Croatia was in the question of what the European Union could do for us once we become a member state. The debates circled around statements such as: there was no need to become a part of the European Union, as we were already a part of Europe, or we were Europe before Europe, or because we needed to safeguard our identity and culture. Later, once we were in the EU, these questions turned into what the European Union did, or did not do for us. Euroscepticism was built on the perception that the expected change did not come, or that it was late, or that it did not transform the society in a way that the citizens expected. Today, according to Čepo, Euroscepticism has come more into focus of moderates as some elements in the European Union are taken over by illiberal actors. They view the European Union as a tool to help them spread their ideas. Tools that were long thought of as Europhiles tools, have been coopted in order to hijack the fundamental values, institutional framework, and the European narrative.  From the point of view of this definition, for Čepo it is of the utmost importance to see what the Conference on the Future of Europe would bring to the table. Would it open the process to stakeholders far and wide, from civil society organizations to state actors, or would it keep it in the intergovernmental hands? The latter would leave the entire process vulnerable to capture by illiberal actors. In the end, he questioned what can be concluded about Euroscepticism from “voting with our feet”, that is, the migration of people from Croatia into other EU member states, and the nature of the opinions of those who remain. Would Euroscepticism grow because people who left were deemed to be the losers of the transition? Or would it diminish with the influx of remittances from those who emigrated? Čepo’s lecture tied into many of the points brought up by the panel discussion participants and echoed many of the concerns and considerations of the academics and the practitioners who deal with this topic in Croatia.

The subsequent discussion revolved around the need to involve as many of the non-governmental actors in the process of debating Europe’s future as possible. Students in the audience stressed the constructive role that young people can have in these discussions and spoke about the need for including them meaningfully, if the European project is to survive in the next generations, especially in the context of the threats from populist and illiberal forces.