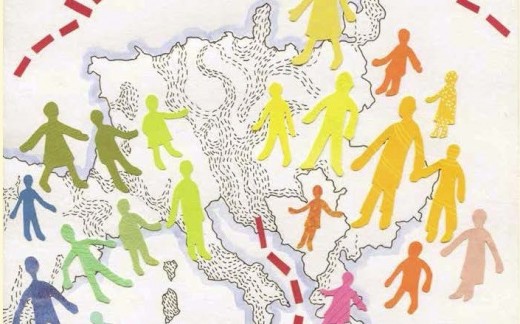 On Tuesday, 21 April 2020, Centre for Democracy Miko Tripalo, in cooperation with the Faculty of Law of the University of Zagreb, organized an online guest lecture titled European Values in Practice: Participation and Integration of National Minorities in Croatia. This event was organized as part of Centre Miko Tripalo’s Jean Monnet Project European Values ​ in a New Member State: Five Years of Croatian Membership in the EU. The lecture was conducted by Antonija Petričušić, member of Centre Miko Tripalo and of the project team, professor at the University of Zagreb. This was the second guest lecture as planned in the Jean Monnet project work plan. It however had to be organized under the nationally-prescribed epidemiological measures due to the Covid-19 pandemic and accompanying lockdown in Croatia prohibiting face-to-face events. The event was attended by 20 students, most of them Erasmus exchange students in Croatia.

Petričušić began with the overview of the situation of national minorities in Croatia, which is home to 22 Constitutionally-recognized national minorities: Serbs, Czechs, Slovaks, Italians, Hungarians, Jews, Germans, Austrians, Ukrainians, Rusyns, Bosniaks, Slovenians, Montenegrins, Macedonians, Russians, Bulgarians, Poles, Roma, Romanians, Turks, Vlachs, Albanians. She noted that current minority policy began developing in the early 1990s and by 2002 the Constitutional Act on the Rights of National Minorities was passed. It guarantees a broad spectrum of minority rights, incorporating all contemporary minority protection standards as set by the Council of Europe’s Framework Convention for the Protection of National Minorities.

She then spoke in more detail about minority legislation which either empowered or introduced several novel institutions of minority representation into the Croatian legal system. It assured substantive participation of national minorities in the political life; particularly through the guaranteed parliamentary seats and the national minority councils and representatives. This legislation also established the Council for National Minorities, the Electronic Media Diversity and Pluralism Incentive Fund. The process of EU accession reinforced these legislative efforts by bringing with it the conditionality principle. According to Petričušić, the ‘second generation conditionality’ for the Western Balkans aimed to increase the level of trust in the deeply divided and ethnically diverse societies in the region.

Petričušić noted that by introducing additional pre-accession conditionality in the field of democracy through the Stabilisation and Association process (SAP), the EU has induced the external socialization that presupposes acceptance of the common European values by the wider Western Balkans population. She spoke about the EU-driven idea that for democratic reforms to be successful in a post-conflict environment with impaired inter-ethnic relations, there has to be a simultaneity of transformation of legislation, institutions, and economic system, along with a process of changing values in a broader population.

Since completing EU accession, however, Petričušić notes that there has been a regression of the value of protecting minority rights in Croatia. Recently there have been requests to abolish or limit some minority rights, often accompanied with assertions that the minorities are privileged, and that the application of minority-related legislation discriminates the majority population. This attitude continues to encourage anti-minority sentiments in society, and sustain stereotypes of members of certain national minorities, the Roma and Serbs in particular. This worrisome trend of retracting minority rights in Croatia, according to Petričušić, continues.

Most recently, in 2018, the ‘The People Decide’ citizen initiative called for a referendum to reform the electoral legislation in a way that would restrict the number of seats in the Croatian Parliament reserved for national minorities. Moreover, there have been warnings about a related and equally troubling development in recent years. Representatives of the Roma, Serb and Jewish communities, as well as anti-fascist associations, have been expressing concerns about the rise of neo-Ustasha sentiment and public expressions of historical revisionism.

Petričušić then spoke about current challenges to preserving and advancing the value of protecting minority rights in Croatia. She stressed that the full realisation of all prescribed minority rights has not yet been assured and cited the following examples:

In conclusion, she spoke about the fact that EU enlargement process is often acknowledged as the Union’s most influential democracy-promotion mechanism and in Croatia during the process of accession this has proven to be the case. The ultimate long-term goal of this process was the transfer of values promoted by the EU into Croatian institutions and processes and their subsequent incorporation in the wider society. Petričušić concludes, however, that this long-term goal was not achieved and that the values of equality and of respect for the rights of persons belonging to minorities have not been (and cannot be) effectively transposed in the short time-span of the Croatian accession process. This implies that the efforts towards socio-cultural changes of values need to be pursued beyond the enlargement.

Student question and the subsequent discussion mostly had to do with real-life examples of infringements of the value of protecting minority rights and concrete cases of breached minority rights, such as those in Greece and Hungary, as well as in Bosnia and Herzegovina and Turkey.