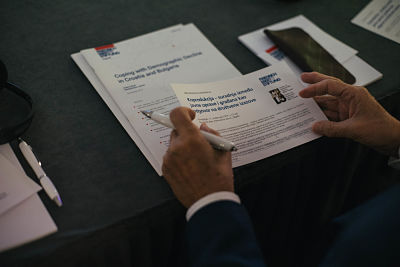 On Monday, November 11, 2019, at 12h, in Zagreb, Centre for Democracy and Law Miko Tripalo and Friedrich Ebert Stiftung organized an international conference Coproduction – Cooperation Between Public Administration and Citizens as a Response to Social Challenges. This conference is the first part of Reducing Inequalities at the Local Level: the Role of Citizens in Local Public Services Delivery in Croatia project, which aims to examine coproduction trends in Croatia and existing models of public administration cooperation with citizens in providing public services.

An opening words were given by Blanka Smoljan, project coordinator of Friedrich Ebert Stiftung Foundation, and Tvrtko Jakovina, President of the Management Board of Centre Miko Tripalo. At the beginning of the conference, Vedran Đulabić, from the Faculty of Law at the University of Zagreb and project manager, and Elke Loeffler, from University of Birmingham, United Kingdom, defined coproduction and outlined the contemporary trends of coproduction. After that, a roundtable was opened for discussion on the coproduction examples in Europe and Croatia. The speakers were Tony Bovaird, Institute of Local Government Studies; Peter Buchmann, AWO; Jasna Buljić, udruga Promeza Zaželi; Aleksandra Podrebarac, Udruga Carpe diem, Karlovac; Lidija Bonačić-Krešić, Udruga PUŽ, Zagreb; i Valter Glavičić, mayor of Labin.

Blanka Smoljan emphasized the importance of this project and the topic it deals with. Friedrich Ebert Foundation have already issued one publication with Centre Miko Tripalo on decentralization in Croatia, and this conference is an important step in further research of relationship between local government and citizens. Tvrtko Jakovina welcomed all present and expressed his satisfaction that the cooperation between Centre Miko Tripalo and Friedrich Ebert Foundation has lasted for several years. He underlined decentralization as one of the key challenges for Croatia, and this is the third time that Centre Miko Tripalo has addressed it. It is important to answer why are these issues still present, what is the cause, and what solutions can be offered. That are the goals of this conference.

Izv. prof. dr. sc. Vedran Đulabić introduced the project and the concept of coproduction. Long-term goals of the project are to map the current state of coproduction in Croatia and to analyze the existing practices of coproduction with a focus on units of local government. Coproduction has been in litarature for a long time, but has not yet been recognized in Croatia as a way of coperation between public administration and citizens. Coproduction began to develop during the 1970s in the United States through the works of Elinor Ostrom, but since 2000s the concept has become popular in Europe. Đulabić said that coproduction has a strong political and economic dimension, and a social one that implies volunteering and participation. He questioned to what extent policy and legal framework allow citizens to be involved in implementation of ideas and decisions, but it is also the question of whether and how motivated citizens are. In the process of cooperation with citizens, public administration must be prepared for a new methods of work, while citizens must develop awareness and responsibility for society.

Prof. dr. sc. Elke Loeffler from the University of Birmingham spoke about the experiences and trends of coproduction at the European level. At the beginning of her presentation she raised the question of what do people with sight problems need the most. The question was followed by a brief discussion during which participants tried to answer. They suggested the development of new infrastructure and good citizens to provide help, development of public awareness about these issues, and to listen to what people with disabilities really want. She emphasized that the key to coproduction is cooperation between representatives and employees of local government and citizens, establishment of mutual understanding in order to provide better public services. It is necessary to change the behaviour of all actors through circular consultation model. She outlined five key steps in achieving effective coproduction results: map existing coproduction approches, focus on those with highest impact, people your coproduction approaches, market the behaviour change, grow coproduction through culture and system change. This should lead to policy outcomes that can be stable, satisfactory and transformational. It is up to us to decide which of these we want. She presented an example of coproduction from Offenbach, Germany that aims to help citizens looking for work and its results.

Prof. dr. sc. Tony Bovaird explained four types of coproduction: co-commission, co-design, co-deliver, co-assess. He warned that not everyone wants coproduction and that not everyone can participate in provision of services because they have not developed institutional capacities. He raised the question of risks of entering coproduction because it requires rescourses and investments to make its results effective and identifiable. Finally, he discussed the obstacles of achieving such a model , which can be cultural, institutional, they can be a result of underdeveloped communication between actors, and insufficient data. Consequently, there is a possibility that they will be focused only on achieving short-term results.

Peter Buchmann gave an example of coproduction from Germany. A migrant office was opened in a smaller city and it was funded by local administration. Initially, the office felt that they would need more money from public authorities to better integrate migrants into society. However, they found migrants that were already well integrated, who knew the language and culture, and who could advise on those who have just arrived in Germany. These people served as counselors for those migrants in need of assistance in providing public services. He stressed that in any case it was important to have a good relationship in society (kindergartens, schools, doctors). This is just one example, but there are many more. It is important to involve and encourage the participation of citizens and civil society actors at every level in order for them to act as public services providers.

During the roundtable, Jasna Buljić spoke about the examples of coproduction from Croatia. She described the cooperation with the city of Kutina, implemented by the Promeza Zaželi association, regarding the employment program for women. Aleksandra Podrebarac from Carpe diem association spoke about the activities directed towards young people in Karlovac. Numerous workshops and consultations were organized with young people about their needs. The first program was not successful, but the second is almost completely fulfilled, while the third is currently underway. Lidija Bonačić-Krešić spoke in front of Udruga PUŽ, Association of Parents of Children with Disabilities. The main values they represent are that every children is entitled to have a family and to have quality care provided. Since the founding of the association, they have implemented around 200 projects, 5 of which were European. Valter Glavičić, mayor of City of Labin, highlighted the economy because without it there is no space for financing other services. An Economic Council was set up in Labin, an advisory body that allows city authorities to achieve higher understanding of their citizens social needs. They realized that most of the problem are related to the young people and their position in society. Scholarships were, thus, a very important factor. They have launched an European Union financed program “carrer guidance” to facilitate young people’s educational path. Another example Glavičić mentioned is creation of cultural strategy in Labin.

After a roundtable, a discussion followed. Gordana Radonić believes that much has been done in Croatia regarding coproduction, but there is still room for progress. The Ministry of Demography, Family, Youth and Social Policy participated in the organization of a number of projects at the central level, but a lot of money is needed to satisfy all services. Boris Glavan asked what the Ministry of Administration is doing regarding coproduction in Croatia. He believes that citizens are very little involved in policy making and service delivery at the local level. Politics must struggle to become a partner in provision of services. It is up to us as citizens to show initiative for change. Jasmina Đinić claims that we do not know that coproduction is present, but in fact it is. Everyone can contribute through various forms of activities.