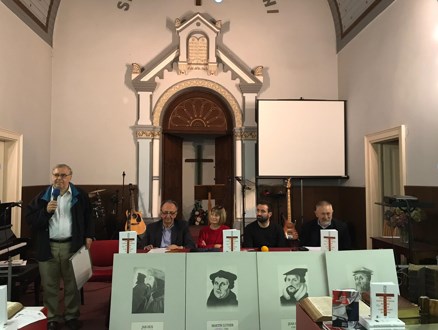 The promotion was co-organized by the Centre for Democracy and Law Miko Tripalo, Evangelical Theological Seminary and Institute for Social Research in Zagreb.

At the beginning of the promotion, a welcome speech was delivered by Peter Kuzmič, Dean of the Evangelical Theological Seminary in Osijek. In his speech, Kuzmič thanked the organizers and all those who participated in the process of creating the book. He emphasized that the goal of Reformation was to celebrate the “word” and it includes forgiveness and reconcilition as core values. Without that, Kuzmič believes, there is no future. The Reformation gave a crucial impact to Europe and liberated it from the Middle Ages.

Ankica Marinović welcomed everyone on the behalf of Institute for Social Research Director Dinka Marinović Jerolimov. Marinović referred to the book as a result of continuous work and research of religious communities by Centre Miko Tripalo experts. It was Centre Miko Tripalo’s incentive to celebrate the 500th anniversary of Protestantism in Croatia and Institute for Social Research followed that idea.

Goran Sunajko spoke as a representative of Centre Miko Tripalo. He underlined that the Centre has been gathering young experts and deals with these topics for many years. In his opinion, humanism and renaissance are often considered as a frontrunners in shaping new opinion process, but the Protestantism was the one responsible for establishment of modern culture. He considers individualism to be the basis of Protestantism and “conscience” which is perceived as a highest possible human law. Man , as an individual, is responsible for his own actions, according to Protestants. The legacy of Protestantism is shaped by the view that nothing can liberate a man from himself.

Vjeran Katunarić, from University of Zadar and one of book’s promoter, said that the authors of the book wanted to teach us how to discuss with those who disagree with us and, at the same time, not to exclude them from further discussion. According to Katunarić, the Reformation helped Christianity to find its place in modernity. Thanks to Max Weber, we received the first information on Protestantism, which helped to build up the relationship between science and religion. That bond is still pretty complicated. Modernity can be seen as a continuation of religious evolution, in a positive way as an attempt to build free and equal world, but also in a negative way. In this book religion is portrayed as a companion of worldly ideas.

The second promoter, Josip Kregar from the Faculty of Law in Zagreb, said we live in times when everything is possible and nothinf is predictable. He believes Protestantism is not only a religion. It is much more than that, most of all a lifestyle and a type of culture. But, unfortunately, it had small impact in Croatia. He said we do not have a society that minority religious endowments, but modesty and faith can sustain them. Protestantism, as such, is guided by a sense of human responsibility.

Finally, Ankica Marinović spoke on behalf of book editors. The Reformation deserves such event, Marinović said. The idea for the book came from the Centre Miko Tripalo and went beyond the scope of the roundtable meeting, with wich the project began. The book brings together works from different disciplines and unites past and present. It is a sign of time and society in which we live. The book aims to guard the knowledge of Reformation.