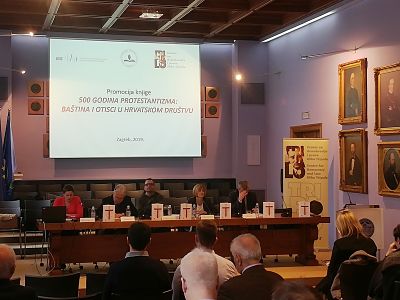 At the beginning of the event, Vedran Đulabić welcomed everyone, thanked the book publishers Centre for Democracy and Law Miko Tripalo, Institute for Social Research in Zagreb and Evangelical Theological Seminary in Osijek. He emphasized that the book offers new insights from a number of scientific disciplines relevant to the study of Protestantism as a religious doctrine, religious community and cultural actor in Croatian society. He reminded everyone that Centre Miko Tripalo, as an organizer of this event, is an association that brings together number of prominent experts and scientists who are engaged in a wide range of topics and that the Centre focuses on topics of democratization, welfare state, tolerancy and diversity in Croatia.

Zoran Grozdanov pointed out that the book transcends the framework of Protestantism and praised Centre Miko Tripalo as a secular organization that deals with the role of protestantism in Croatia. He spoke about the importance of protestantism in the context of religious pluralism that is underestimated in Croatia, but is highlighted in the book. Protestant heritage in Croatia is far more important than it is assumed by the number of protestants in Croatia, bearing in mind the fact that the first edition of New testament in Croatian language from 1563 resulted from the Protestant Reformation. Afterwards, Grozdanov read the letter of Croatian theologists Miroslav Volf, professor at Yale University and reviewer of the book, who welcomed the publication and stressed its contribution for understanding protestantism in Croatia.

In his speech, which was read because of his absence, Vjeran Katunarić said that the book is about religious tradition that was from its inception a courageous opposition to one authority and for its long duration it transcends every attempt to decrease or to deny its importance in the process of building Croatian national and cultural identity. The social distance between members of different religious groups in Croatia is smaller than distance between natinal and ethnic groups. For exmaple, Catholics are more tolerant towards the Orthodox and vice versa, than the Croats towards Serbs. The leaders of religious communities , even more than national leaders, have a higher authority in creating social and political awareness. Therefore, they have higher responsibility before domestic and international public even if that means an opposition to every policy that divides rather than connects people by questions of faith or nation.

Ankica Marinović said she hopes that we will not have to wait for another anniversary to publish another book and she underlined that this book is a scientific one that brings together multidisciplinary works, from different time periods . In addition to its scientific charachter, the book promotes the ideas of tolerance and dialogue.