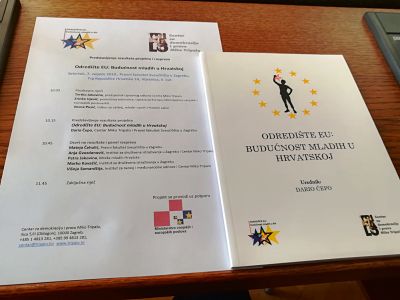 At the beginning, Tvrko Jakovina welcomed all the guests and thanked the Ministry of Foreign and European Affairs for cooperation with Centre Miko Tripalo during the project research. He highlighted an important role Centre Miko Tripalo has as a place of dialogue between scientists and experts with representatives of state institutions and decision makers. Zrinka Ujević reminded of the importance of Croatian accession to the European Union and stressed the context in which European Union currently is. Croatia’s upcoming presidency of the Council of the European Union is an opportunity for young people to engage more actively and to learn more about the processes in the EU. She welcomed the project results and research as an important reference guide for inclusion of young people in decision making. Vesna Pusić praised the efforts of Centre Miko Tripalo to raise the public awareness of the role of youth and said that she will encourge further discussion on this topic in Parliamentary committees responsible for youth policies.

Dario Čepo presented the details and results of Destination EU: The Future of Youth in Croatia project, which was co-financed by the Ministry of Foreign and European Affairs. The goal of the project was to identify, raise awareness and close the sources of insufficient knowledge of young people about the European integration, European institutions and policies, and to say something more on the relations between Croatia and the EU. Through professional analysis, survey and dialogue with youth, the project successfully identified the reasons for the lack of information among young people in Croatia. The research was dividesd into two parts. In the first part, younf people completed a survey which has been used to determine the current level of knowledge of younf people about the European Union. In the second part, during the workshops held throughout Croatia (Osijek, Pula, Zadar, Vukovar), project team of Centre Miko Tripalo, together with young people, discussed the most pressing issues and, at the same time, young people offered their proposlas for solution to these problems.

The survey, which contained 16 questions, was completed by 437 young people. In questions related to the knowledge of EU law and institutions, the highest percentage of youg people (53%) answered that they have poor or very poor knowledge of the EU institutions responsible for youth policies, while only 4% knows them very good and 16% good. Similarly, young people responded that most information about the rights and institutions of the EU they get through social media (45%), while educational institutions have helped only 15% of them to get that information. A key indicator of the survey that reveals a pessimistic attitude of young people towards their role in society comes from the fact that over 80% of respondents said that their influence on decision making process, both at natinal and European level, is small or non-existent.

Expert and project team analysis showed that Croatia has not done enough to take greater advantage of EU membership, and that the benefits of the same membership are not clear to young people. Young people in much larger percentage believe the European Union and its institutions than they trust domestic institutions and actors, which is problematic given the previously identified lack of understanding of EU law and institutions. However, the experts observed an identical problem: lack of interest of state institutions and political actors to change their attitude towards young people, which is the reason why young people see the EU primarily through the economic benefits and employment opportunities in other member states.

In the conclusion of the project, project team offered proposals for further improvement of the situation among young people in Croatia. There is a need to reform the Croatian school system with focus on the European dimension, encouraging young people to be socially and politicaly engaged in order to for them to be equal political actors, but also to use European mechanisms on a greater level, such as European funds, knowledge and experience exchange.

Project and research details on:
https://odrediste-eu.tripalo.hr/