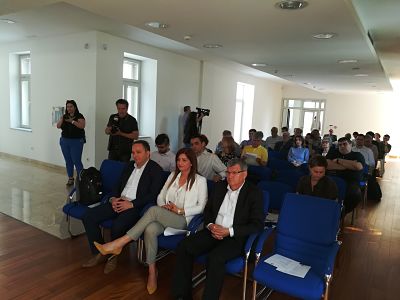 On Friday, May 5 2019, in Sinj, Centre for Democracy and Law Miko Tripalo organized fifth annual conference called Tripalovi dani u Sinju. This scientific symposium, in an appropriate way, marks the connection between Miko Tripalo and his hometown Sinj. On the occasion of sixth anniversary of Croatian membership in the European Union, this years main topic for discussion was Croatia in the First Six Years in the EU: European Values in Croatia – New Member State. The program contained two panel discussions: Entrepreneurship, Solidarity and Local Development and Youth and European Values.

Tvrtko Jakovina emphasized the importance of this conference that every year is trying to answer fundamental questions and issues related to Croatian society, with the idea of building a just and legal framework for our country. Branko Roglić expressed his satisfaction that once again he hosted this event, and said that Croatia should make effort to join the countries of market economy and follow the ideas advocated by Miko Tripalo. Kristina Križanac underlined the element of unity at this conference, while Ivan Nasić welcomed the engagement of local people and handed the appropriate gifts to both Jakovina and Roglić.

Vesna Pusić was the keynote speaker on the first panel. She began her presentation with the quote „under the right circumstances any society can turn against democracy…“ She sees four important criteria for democracy development: assesment of the situation in judiciary, fight against corruption, relationship with neighbouring countries and Index of democracy. In 2017, Croatia had the worst results regarding the level of political culture. She consideres problematic continuous shift from progressive to retrograde ideas in Croatian society. Despite all this, Croatia is still the most developed country in the region.

Ivo Josipović was the keynote speaker on the second panel. He spoke about the situation in judiciary and the European values among youth. According to Josipović, Croatia showed the improvement but still has not fully taken advantange of the opportunities that the European Union offeres. He emphasized young population as driving force of social changes.

Speakers on the second panel were: Mateja Čehulić, Jakov Žižić, Valentino Petrović and Dora Kršul, with Dario Čepo as moderator.