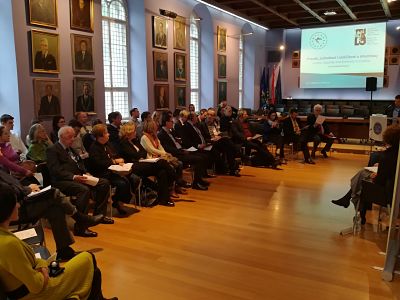 On Monday, 13 May 2019 at 10:30 in the Aula of the University of Zagreb, Centre for Democracy and Law Miko Tripalo organized a roundtable Justice, Equality and Diversity in Croatia. This roundtable is part of Centre Miko Tripalo’s Jean Monnet project entitled European Values in a New Member State: Croatia in the First Five Years of EU Membership, co-financed by the European Union.

Tvrtko Jakovina, President of the Management Board of Centre for Democracy and Law Miko Tripalo, gave the opening speech and welcomed all the guests, members and friends of Centre Miko Tripalo and members of foreign embassies.  He said that divisions in society are not unusual or rare, and that we are once again witnessing the rise of nationlism and anti-globalism. In order to prevent this it is necessay to discuss European values: rule of law, freedom, equality. Centre Miko Tripalo shares these values and seeks to discuss them in Croatian and EU context. Dario Čepo, academic coordinator of the project and moderator of the roundtable, said everyone defines European values differently and that Centre Miko Tripalo aims to show how are these values transferred into Croatian society. As a part of the project, he announced an international conference to be held in December 2019.

First speaker, Lucia Mokrá, welcomed the debate on European values ​​which is at this moment of particular importance, given the upcoming elections for the European Parliament. She raised the question of the content of values, them being misunderstood by politicians, but she also reffered to the lack of readiness of EU Member States to implement them in their national frameworks. She pointed out that value, such as freedom, democracy and dignity, were dominant themes during the previous EU enlargement processes. However, in recent years this has changed, and nowadays themes of solidarity and rule of law are in the main focus. She believes that the problem is the evaluation of European values ​​after they have been implemented in national systems of Member States. She argues that a possible solution to the problem of evaluation is in greater transparency during the decision making process, separation of power, and more efficient anti-corruption measures. In this context, she emphasized rule of law as the only value that can be evaluated due to its institutional framework which makes it possible. The signing of Lisbon Treaty made that possible, since the Treaty provided the EU with stronger institutional mechanisms to monitor the implementation of its fundamental values.

Antonija Petričušić believes that European values ​​should be the guarantee of stability, but today they are exclusively normatively based, which allows for their different interpretation and rise of populist ideas, or skepticism. She discussed the additional criteria that European Union imposed on Western Balkan countries during their accession period. On the basis of these critera, the countries of the Western Balkans were meant to show their willingness and ability to change their legislation and institutional framework, while other countries that previously joined the European Union did not have these requirements. She pointed out that there is a widespread perception that the accession process applies only to political elites, not the entire population that does not show a committment  towards values. Political elites, on the other hand, need to show the minimum of “normative optimism” towards values ​​and will be considered ready to follow them. She states that in Croatia historical revisionism is present which stimulates proliferation of extremism against minorities. According to Petričušić, the values ​​are still not consolidated in the Croatian society and that requires an active involvement not only of politicians, but also of other social actors as well.

Biserka Cvjetičanin discussed cultural diversity which has become one of the greatest challenges of our time. Cultural diversity is an universal issue and it needs to be addressed through broad consensus. In her speech, she mentioned UNESCO documents that encourage cultural pluralism, as well as documents adopted by the European Union: European Agenda for Culture in a Globalising World (2007) and New European Agenda for Culture (2018). She stated that intercultural dialogue is one of the fundamental pillars of diversity, but expressed concern with situation regarding minorities in Croatian society, accoring to which Croatia does not show any progress. Finally, she mentioned the 2018 spring Eurobarometer survey which included a question “What does the European Union mean to you personally?”. 26% of Croats responded cultural diversity, while at the EU level the importance of cultural diversity is declining. Respondents from Sweden and Denmark showed the highest level of recognizing cultural diversity as an important issue.

The second part of roundtable was opened by Adam Sulikowski. He spoke about the judiciary in Poland, its perception among citizens and opened his speech with several major thesis. He noted that the ruling political elite in Poland presented their values to the public as “European” and appropriate for Polish society. Such values are economically neoliberal and more socially conservative than true European values. This is the reason why lower social classes are passive and do not oppose the rise of non-democratic institutions. He cited a study showing that political elites in Poland do not consider judiciary to be in crisis and that law functions properly and equally for everyone. Middle and lower classes are of the opinion that judiciary works closey with politics and it does not treat all citizens equally. He said that causes of political crisis are both structural and practical, and that societies in general do not consider European values to be important.

Ivo Josipović said that some of the values we advocated ten years ago are no longer important for us. In particular, he analyzed the work of the judiciary in Croatia, and said that the black-white image of politics and judiciary has created a state within a state. He questioned whether state institutions work poorly and, for that reason, are not respected by citizens. Or they are not respected enough and therefore work poorly. He claims that the legitimacy of judges should be the result of their expertise and moral values, but unfortunately judges today are not held responsible for their actions. He argues that public perception is that court cases and processes take too long and that people are not treated equally before the law. On the other hand, there is EU data according to which Croatia is investing heavily in the judiciary and which shows that the situation is not so bad. In his opinion, Croatian judiciary is extremely closed towards adopting new ideas and knowledge, and that is because of the constant criticism of the judicial system.

Josip Kregar said there is a lack of professional communication and discussion with the judiciary because it has created a closed system in which the judicial authorities do not want to collaborate with academic community. In his opinion, there is not much that can be done, because such processes would last long and would be too expensive. He argues that judicial optimism is a part the daily discourse of politicians. Politicians claim that the possible solution is changing the law, but when the time comes they do not do so. Likewise, interest groups do not want the situation in judiciary to change because they benefit from the existing system and seek to annul any change that can lead to a just and functional judicial system.

Alan Uzelac emphasized two topics: objective criteria for appointing and promoting judges and free legal aid. He cited the creation of Judicial Academy as an attempt to establish efficient and high-quality body, which should ensure transparent candidate recruitment process for judicial officials. In his opinion, State School for Judicial Officials failed to fulfill its goal. According to Justice Scoreboard, Croatia is situated at the last place when it comes to citizens’ confidence in judiciary. 76% of citizens feel that situation in judiciary is bad or very bad. Uzelac argues that such situation is a result of clientelistic model of appointing judges. Likewise, Free Legal Aid law has not created an effective and accessible system for citizens, and it should include a broad possibility of legal consultation for citizens and all those who have difficulties in exercising their rights.