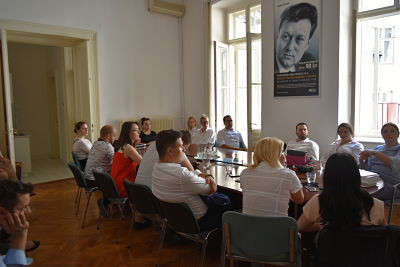 On Friday, 28 June 2019, Centre for Democracy and Law Miko Tripalo hosted the representatives of Youth Initiative for Human Rights – Croatia and their partners as part of the Political Youth Network conference. The conference brought together politically active young people from Croatia, Bosnia and Herzegovina, Serbia, Montenegro and Kosovo with a goal of acquiring new knowledge about intra-party democracy, European Parliament elections and European integration.

Vanja Mladineo gave a presentation on the work of Centre, its activities and projects. She stressed Destination EU: The Future of Youth in Croatia and European Values in a New Member State: Croatia in the First Five Years of EU Membership as two projects whose aim is to raise awareness of importance of including young people in decision and policy making. She also emphasized the role of Centre as a think tank that deals with integration of different ideas from different disciplines, including contemporary issues that Croatian society and European Union is confronted with.

Dario Čepo spoke about European values and democracy in Croatia. He underlined the importance of Lisbon Treaty and four values that were defined by it (respect for human rights, freedom, equality and the rule of law) that should lead to the protection of democracy. He referred to the Liberal Democracy Index data according to which Croatia has the problem of violation of freedom of expression, lack of media independence and media (self)censorship. He sees the failure of Europeization process as a product of EU’s elite focus on economic integration, rather than political. Finally, he presented the results of Destination EU: The Future of Youth in Croatia project and its conclusions.

Dario Nikić Čakar gave a presentation on intra-party democracy, stating that the concept itself is still unclear as it is not defined whether it includes participation, inclusion, decentralization or accountability of members of political parties. Parties are also influenced by various factors such as electoral system, party system, legislative procedures. The main issue is the position of highest authority in party structure and decision making. He sees political leaders as the most important actors in decision making process as they have a key impact on voting behaviour. The lecture was followed by discussion with guests.