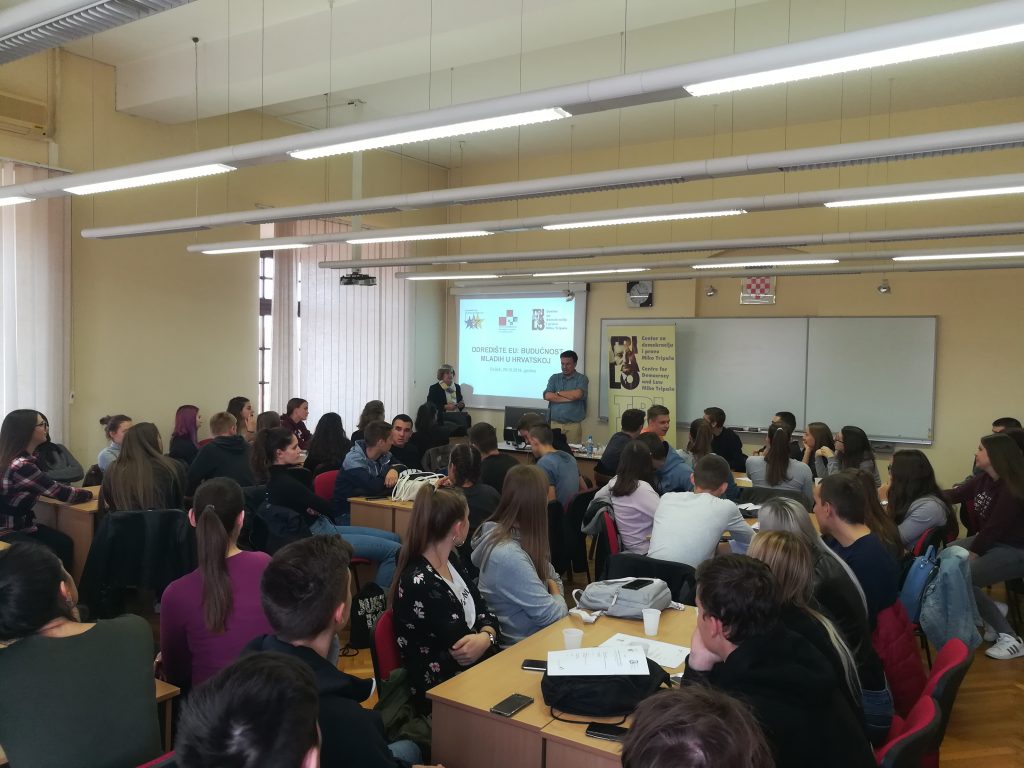 On Friday, 26 October 2018, Centre for Democracy and Law Miko Tripalo organized a Destination EU: The Future of Youth in Croatia project workshop at Doctoral School at the J. J. Strossmayer University in Osijek. The workshop was aimed at youth and the goal was to discuss and explore the causes that affect the level of knowledge among young people about the European Union and their rights as citizens of Europe. The workshop was attended by 64 participants, 50 of which were young people.

At the beginning of the workshop Dario Čepo, project manager, summarized the goals of the project and workshop objectives to the participants. Afterwards, he held a presentation on the topic of EU membership and the role of youth in Croatia as an introduction to the workshop. The participants were divided into ten groups and each group got one of three question for discussion (Which are the positive and which are negative sides of the EU? What do you expect from the EU? Should young people participate in politics and why?) After the discussion within groups, one representative from each group briefly presented the reflections and conclusions of thier group.

After a short break Višnja Samardžija gave a presentation on the topic of youth, employment and job opportunities and she analyzed what has changed since Croatia joined the EU. Each group got one new question for discussion (When you think about your future, what is the most important for you staying in Croatia? Do you think your generation will have a better life than your parents?). Participants once again discussed about the issue within each group. Same as before, one member presented a summary of the discussion. At the end of the workshop, all participants were given a questionnaire where they were asked to write how they see their future in Croatia and the European Union.