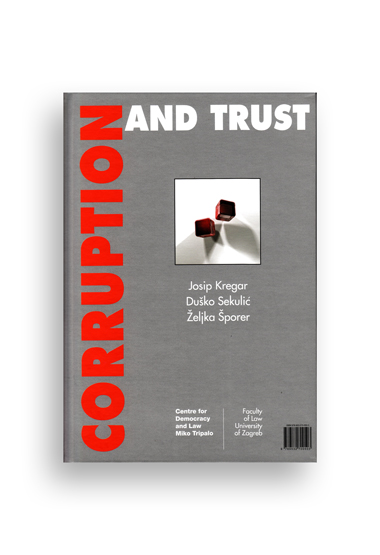 The book Corruption and Trust investigates and analyzes the problems of corruption in Croatia and the public’s trust in key institutions in the country.

In the preface to the book, Josip Kregar notes that corruption is an extremely complex problem, which has a drastic impact on the social fabric, the relations between citizens and their attitudes towards institutions of government, political and economic elites. The author shows that it is extremely difficult to create a methodological research mechanism which could be used to completely address all aspects of this complex problem, but it is nevertheless possible to follow certain trends and consequences of corruption, as well as the attitudes of citizens towards corruption.

In the chapter Corruption: Ignorance is Not Innocence, Kregar tries to answer several key questions and offer conclusions based on years of research into the problem of corruption in Croatia. Questions that Kregar is trying to get (or give) answers to are: Is there corruption in Croatian society, how widespread it is and what can be done to resolve and prevent it? In this chapter, the author conducts an analysis and a comparison study of corruption using data primarily from corruption perception indices, longitudinally, as well as by comparing them with countries in the region. The conclusion is that the problem of corruption in Croatia is very pertinent, but at the same time the situation is not worse than in some other European countries.

DUŠKO SEKULIĆ and ŽELJKA ŠPORER
Are We Losing Trust in Institutions?