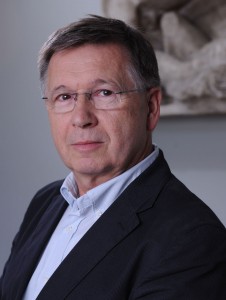 ZVONKO MAKOVIĆ (born in 1947), MA in Art History and Comparative Literature from University of Zagreb. Since 1957 Z. Makovic has been a TA, assistant professor, associate professor and full professor at the Department for Art History. At the moment he is a Head of subdepartmant for Modern Art and Visual Communication, hence director of the PhD track Art of 19th and 20th century . He is an author of numerous books for which he has been awarded several time so far.
Z. Makovic was a Croatian team leader at La Biennale di Venezia, project manager at project Croatian Art of 19th and 20th Century in the European Context (2002-2006); project manager at project Croatian Art from Classicism to Postmodernism (2007-), Croatian Association of Artists; Project manager of the project regarding Croatian-Serbian connections in art in 19th and 20th century.
Z. Makovic was an author and a manager of several exibitions. Some of them are: – 50’s in Croatian Art , Croatian Association of Artists; 2004 – Avangard Tendentions in Croatian Art, Klovićevi dvori Gallery, Zagreb, 2007;  Passion and Rebellion – expresionism in Croatia, Klovićevi dvori Gallery, Zagreb, 2011.
Between 2005 and 2009 he was a president of Croatian P.E.N. center and after 2009 vicepresident.
E-mail:: [email protected], [email protected]