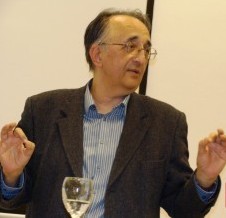 Tenured professor of sociology at the Faculty of Philosophy, University of Zadar. He researches and studies ethnic relations, multiculturalism and cultural politics, as well as social theory. Vjeran Katunaric was a visiting professor at several international universities in Sweden, USA and Germany an project manager of two projects dealing with culture (Izvještaj o kulturnoj politici Republike Hrvatske /A Report of a cultural policy in Croatia and  i Strategija kulturnog razvitka u RH/A Strategy of a cultural development of Croatia). Hence, he was working as an expert and a consultant at European Council.
Vjeran Katunaric was awarded medal Orden Danice s likom Marka Marulića and the National Award for Science given by the Ministry of Science, Education and Sport of Republic of Croatia.
Main works: Dioba društva /Division of Society/ (1988), Teorija društva u Frankfurtskoj školi /Theory of Society in the Frankfurt School/ (1990), Bogovi, elite, narodi /Gods, Elites, Nations/ (1994), Labirint evolucije /Labyrinth of Evolution/ (1994), Sporna zajednica: novije teorije o naciji i nacionalizmu /Disputed Community: Recent Theories of Nations and Nationalism/ (2003), Lica kulture /Faces of Culture/ (2007), Ženski eros i civilizacija smrti /Female Eros and the Civilization of Death (2009).

Vjeran Katunaric recieved Rudi Supek award (Croatian Sociological Association) for the outstanding results and achievements in the area of sociology, its development and promotion.