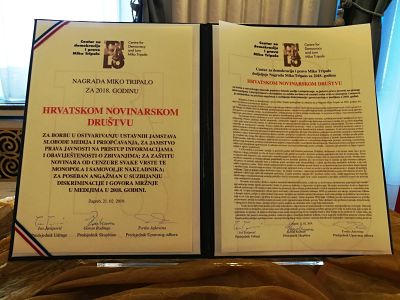 At the beginning of the ceremony, Tvrtko Jakovina, President of the Management Board of Centre for Democracy and Law Miko Tripalo, welcomed everyone and said that Centre Miko Tripalo rewarded various journalist organizations several times, but this year it was decided that the Award will be given to Croatian Journalists’ Association, as a leading journalist organization in Croatia. He added that this award differentiates jounalists who do their work in honest and professional way, from those who abuse it. Today, journalists are exposed to pressure and intimidation, with their media houses under strict discipline and forced to self-censorship.

After that, two journalist students from Faculty of Political Science in Zagreb, Lea Medica and Janko Debeljak, addressed the audience, thanked for the invitation and stressed that journalism is something you live your whole life. They added that journalism, as profession, is extremely important and must be guided by the principles of ethics, truth and objectivity. In addition, they released an appropriate video material made by students of journalism.

Viktor Gotovac, Deputy President of the Management Bord of Centre Miko Tripalo, read the text of the Award.

Hrvoje Zovko, president of the Croatian Journalists’ Association, said he was proud to the award and that it is also a recognition for his colleagues, and all those who are exposed to verbal attacks, pressures and in danger of losing their job. He believes that the Award is proof that responsible journalists are not alone and their commitment and work of HND is recognized. Particulary, he was glad to win the Award that is named after a great historical figure and a man who always fought for democracy and a better society.

The text of Miko Tripalo Award for 2018 to Croatian Journalists’ Association is attached.