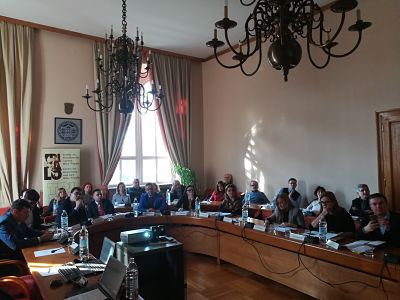 On Thursday, 14 February 2019, in the Great Hall of the University of Zagreb, Centre for Democracy and Law Miko Tripalo held a conference called CLIENTELISM IN CROATIA: POLICIES, PROCEDURES AND CONSEQUENCES OF TRADING WITH INSTITUTIONAL POWER.

The presenters and other participants discussed interdisciplinary about the conceptual, methodological and specific national charachteristics of clientelism, but also pointed to its daily manifestations in different areas of social life in Croatia.

Chair of the conference, Goran Radman, said that clientelism is a matter of great concern for all generations due to the consequences it has for the future of Croatian society.

Kristijan Kotarski held a keynote presentation in which he differentiated the concepts of corruption and clientelism and stressed that, since the first elections in Croatia, there is a concentration of 63% of all mandates in the hands of two largest political parties. He said that Croatian Democratic Union (HDZ) since its founding has won by far the most mandates than any other political party in other countries of transition economy.

Valentina Vučković and Ružica Šimić Banović said that Croatia introduces system reforms during the period of crisis, which is in contrary to the general accepted view that the reformas should be introduced when it is allowed by favorable macroeconomic conditions.

Velibor Mačkić discussed clientelism in the area of shipbuilding and came to the conclusion that the state offeres increased guarantees to shipyards in the election year.

Vuk Vuković argued that clientelism is widespread at local level and that citizens tend to award budgetary populism and increasing debts policies, which supports his thesis that corrupt mayors have a greater chance for re-election.

Anka Kekez analyzed clientelism in the areas of social services, in particular home help and care.

Together with Petar Sorić, Mačkić has defined clientelism as a result of poor business activity.

Dora Kršul underlined the role of clientelism in academic community, which often defends itself with the thesis of university autonomy.

In her research, Vlasta Ilišin proved that young Croats more than any other citizens of the European Union justify the use of personal connestions and acquaintances in finding job and that the perception of meritocratic principles in society is declining.

Snježana Banović pointed out that the Croatian cultural policy has become an area of ideological and political control and self-censorship, not a space of society enrichment.

Dražen Lalić analyzed clientelism in football and said that, in Croatia, football is often seen as a servant of politics, but politics is at the same time a maid of football.

Josip Kregar believes that the state often legitimizes selfishness, and that education and expertise no longer play an important role.

Saša Leković said that journalists have to be protectors against clientelism.

Dario Čepo offered a pessimistic view on Croatian politics, despite Croatian entry to the European Union. He emphasized the EU’s unsuccessful policy of conditionality during negotiations that do not lead to genuine transformation of institutions.

Participants abstracts can be downloaded here: