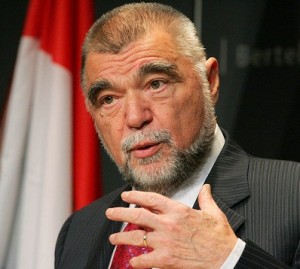 Politician and lawyer. Member of Parliament since 1965, participant in the Croatian Spring movement. Member of Parliament of the Republic of Croatia (1990 and 1992), President of the Presidency of Yugoslavia (1991), first Croatian Prime Minister, Chairman of the House of Representatives of the Croatian Parliament (1992-94). One of the founders of the Croatian Democratic Community (HDZ), founder and president of the Croatian Independent Democrats (HND), since 1997 member of the Croatian People’s Party (HNS) and its executive vice-president. President of the Republic of Croatia (2000 – 2010). Contributed to the opening up of Croatian foreign policy and normalizations of relations with neighboring countries, as well as to overall democratic development of society. He published a memoir Kako smo srušili Jugoslaviju /How We Destroyed Yugoslavia/ (1992, 2nd edition entitled Kako je srušena Jugoslavija /How Yugoslavia was Destroyed/, 1994). Co-authored the book Doba ekonomske diplomacije /The Age of Economic Diplomacy/ (2010) with professor Jasna Plevnik.